On August 21, the Pittsburgh office of K&L Gates (where Don Seymour has been practicing law since 1970) promoted its second annual “Jean’s Day” under the leadership of its younger attorneys, with Lauren Garraux at the point.  In “stepping up” by “dressing down” our Fund received well over a thousand dollars by nearly 200 contributors.  That’s a lot of denim.

To the Team Clint Runners – Amanda Burtt, Mary Strasbaugh, Lindsey Navickas, Lindsay Littler, Emily Baird, and Jessica Davis – for completing their goal and finishing their team race in honor of Clint at the 2015 Pittsburgh Marathon.

To our friends at K&L Gates, who will again be honoring The Fund on Opening Day 2015 with a Pirates-themed “jeans day” to raise money for our cause.  It was a tremendous success last season.

To one of our recent donors, a Charleston-area woman in her mid-90’s who lost her son 75 years ago as a result of a blow to the head.  Her contribution was enclosed so that her son, who also loved baseball, may be remembered as part of our Fund’s mission.

Matt Bianco, who has been a major advocate and instrumental motivator for The Fund as we transition our donations toward realizing our mission.  No one can be more helpful in this pursuit than Matt, who celebrates Clint as his first ever baseball student in a truly remarkable career as a coach and mentor to young baseball players.

Emily Baird, Mary Strasbaugh, Lindsay Littler, Lindsey Navickas, and Jess Davis will run the Pittsburgh half marathon next spring in Clint’s honor and to raise money for his fund. They have formed a team in Clint’s name and honor and are fundraising their effort through this website. She already has attracted several other volunteer runners and some contributions that will continue in the months between now and the race in early May.

Lynn Lloyd, whose beautiful handmade jewelry will both raise money for the fund and allow those who purchase her bracelets feel more connected to the legacy of Clint.

Clint’s Acrophobia – Next Chapter:  Inspired by his son Brian’s scaling of Mt. Rainier accompanied by Clint’s spririt and, Clint’s Uncle Rich Seymour ascended Machu Picchu in Peru…accompanied by his step-son (Clint’s cousin) Owen Vogel (who wore Clint’s hat the entire way) and friend Erica.  Clint made it to the summit once again.  He has become quite the climber. 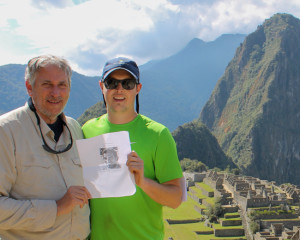 Jayson Langfels, friend and college teammate at EKU, who took Clint with him through The AA Playoffs with The Colorado affiliate Tulsa Drillers by writing his name under his ball cap.

The Friends of Nancy Seymour, for making a memorial contribution to The Fund in her name for her birthday on September 30th.

Lindsay (Izzy) Ismer, Clint’s EKU friend, successfully nominated our Fund as a recipient of the Blackbaud Corporation (Charleston SC) philanthropy gift program.  Big fist bump to Izzy for remembering Clint in this way and to Blackbaud for having confidence in our mission. 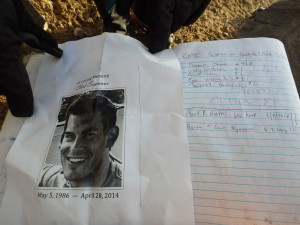 Mark Saghy and the Western Pennsylvania Baseball Coaches Association made a generous donation to our Fund as well as honoring Clint with a moment of silence prior to the 2014 WPIAL All-Star Weekend games. Clint was a player in the very first event in 2004.

Jernigans and the Saloon made a generous donation to our Fund as a result of a raffle at this year’s golf outing thanks to Kirk Klett.

K&L Gates Pittsburgh Associates Committee held a “Jean’s Day Friday” fund-raiser for the Fund on May 30, 2014 raising $4,658, which will be matched with an equivalent donation from a Board member..

The Soho Grill on Pittsburgh’s Northshore, via Manager Karen Weil and bartender Nate M’sadoques, created “The Seymour” drink, in honor of Clint, with a portion of the proceeds of its sales to be donated to our Fund. It has become a favorite on Soho’s drink menu, particularly with the ladies. Visit Soho on the way to a Pirate or Steeler game and say hello to Clint’s friends.

The Pittsburgh Pirates honored Clint with the “first pitch” ceremony by Carly (a strike to Pedro Alvarez) and Don (a potential wild pitch grabbed by an agile Neil Walker) on the May 10 game against the Cardinals, including a nice mention of our Fund on the stadium’s Jumbotron.

ROOT Sports broadcast a tribute to Clint during the May 2 (first game of DH) Pirates – Orioles game from Baltimore.

Niki and Neil Walker: for graciousness toward Clint’s family too precious to articulate.

Don Dixon (Clint’s “cousin”): for remembering Clint by lighting a candle in his living room in Canton every time he and Marti watch a baseball game.